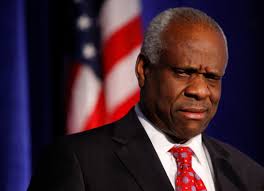 Last week, U.S. Supreme Court Justice Clarence Thomas proved that black people in positions of power can be African Americans’ worst enemies. He wrote the majority opinion in a 5-to-3 decision in a case that will allow police officers to use evidence obtained after illegal stops if the cops find out that the person being stopped has an outstanding arrest warrant.

In his opinion, Thomas wrote that such searches don’t violate the Fourth Amendment when the warrant is valid and unconnected to the conduct that prompted the stop. The high court heard a case from Utah in which a man, Edward Strieff, was pulled over after leaving a suspected dope house that police had under surveillance. State prosecutors later conceded that there was insufficient grounds to stop Strief. While Strief was being detained, South Salt Lake Police Officer Douglas Fackrell learned he had a warrant for a minor traffic violation. The cops arrested Strief and found methamphetamines and drug paraphernalia after searching him.

Thomas said Utah police officers, as well as across the country, deserved a free pass to use evidence obtained illegally. “Officer Fackrell was at most negligent,” Justice Thomas wrote, adding that “there is no evidence that Officer Fackrell’s illegal stop reflected flagrantly unlawful police misconduct.”

Justice Sonia Sotomayer, who wrote a dissenting opinion, noted that “it is no secret that people of color are disproportionately victims of this type of scrutiny.” She added: “It implies that you are not a citizen of a democracy but the subject of a carceral state, just waiting to be cataloged.”

Thomas should have joined Sotomayer in striking down the case against Strief. Instead, he proved that African Americans who reach the pinnacle of power don’t defend their own people. In fact, they are harder on blacks. It’s no different from the black boss who picks on his African American employees more than the his white subordinates. Uncle Toms like Clarence believe they have to fuck over black people.

It’s happening from the highest court in the land all the way to the local level. I get more conversations about getting shit done in the black community with Cuban county commissioners like Xavier Suarez and Bruno Barreiro. The African American politicians only want to talk to me when they are trying to get re-elected. Other than that, they never pick up the phone.
Twitter Unclelukereal1