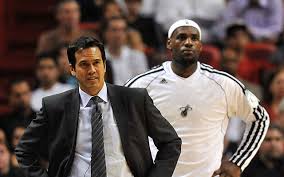 Now we are going to see if Erik Spoelstra is really an elite head coach in the NBA. Two years after Pat Riley gave his former assistant the keys to the Miami Heat franchise in 2008, Spoelstra got to coach the Big Three: Lebron James, Dwyane Wade and Chris Bosh. The payoff was huge for the NBA’s first Asian American head coach.

During his eight years at the helm, The Heat has only missed the playoffs once. During the entire Big Three era, Spoelstra led Miami to back-to-back world titles in 2012 and 2013 and four consecutive NBA Finals appearances, matching a feat only accomplished by his mentor Riley, as well as Boston Celtics legends Red Auberbach and K.C. Jones.

Yet, there were signs the players didn’t respect Spoelstra like the time James bumped him during a timeout in a game against Dallas in 2010 and when Wade yelled at him during a 2012 playoff game against Indiana.

Since James bolted home for Cleveland and Bosh’s recurring blood-clot problems sidelined the All-Star power forward, Spoelstra’s job has gotten tougher. But he still had Wade to save the Heat’s playoff chances. Not anymore. After 13 years with the Heat, Wade went home to Chicago this offseason.

Spoesltra went from driving dad’s Bugatti to mom’s minivan. Sure, the Heat have a good crop of young, talented players like Goran Dragic, Hassan Whiteside, Josh Richardson and Justise Winslow. But you can’t make a case anyone of them will become all-stars, much less beat Lebron James and his defending NBA champion Cavaliers in a seven game series.

The team started off hot with a season opening 108-96 scorching of the Orlando Magic, giving him 400 wins, second only to Riley in Heat history. The Heat followed up with consecutive losses to the Charlotte Hornets and the San Antonio Spurs. After Sunday’s game against the Spurs, Spoelstra already showed signs of problems with Whiteside when he called out the Heat center for not playing through leg cramps near the end of the fourth quarter.

The fans certainly don’t think Spoelstra is elite. That’s why lower bowl seats for the Spurs game were selling for $50 a pop.

His legacy depends on the outcome of this season. If the Heat fails to make the playoffs, then that means he’s not in the same category as Riley, Auberbach, Phil Jackson and Gregg Popovich. He just got lucky coaching the best players in Heat history.
TWITTER UNCLELUKEREAL1
IG UNCLELUKEREAL1