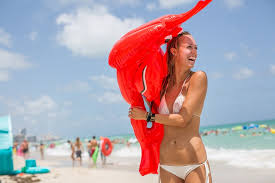 Floatopia in Vote Commissioner Grieco Out

For a guy who rejected a Cuban consulate in Miami Beach due to the communist country’s oppressive regime, Michael Grieco is going around acting like a dictator. Over the weekend, Grieco lost it over the giant mess left behind by people who participated in the annual Floatopia. In front of television reporters, he declared Floatopia would never return to the city.

“I don’t know how 100,000 people can come out to my beach and just not take what they brought with them,” Grieco told WPLG 10. “I have no interest in fixing this event.”

First of all, it’s not your beach Mikey. The beach belongs to the public who pay taxes so that the city can properly maintain it. Grieco might as well change his last name to Castro. It’s your job to make sure City Manager Jimmy Morales is preparing for the onslaught of people. It’s the city commission’s job to make sure you budget for extra sanitation workers, extra police officers, extra firefighters for these massive events.

Grieco and the rest of the city commission certainly make sure to prepare for when the BLACKS come to Miami Beach during Memorial Day Weekend. Miami Beach officials get so nervous, they bust out license plate readers on the causeways, shut down residential streets, and bring in every available cop from other jurisdictions to deal with black masses. Yet, somehow, they were blindsided by a bunch of white people with floaties. Floatopia has been holding its annual event in Miami Beach for at least three years.

Maybe if Grieco wasn’t so busy trying to be a social media superstar with his Facebook live videos, he might want to try to actually lead. He should be demanding to know why Morales didn’t have additional cops and clean up crews out there. Grieco should be calling for the city manager’s firing for not being ready. Even on slow weekends, trash cans on the beach are overflowing with garbage because no one comes by to empty them.

Instead, Grieco has the audacity to say a certain group of people can’t use the public beach. That’s bullshit. The commissioner better watch out. I’m going organize my own unsanctioned event on the sand. It’s gonna be called “Blacktopia