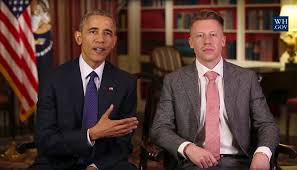 I never thought of President Obama on Some Hollywood Shit. Snubbing Real hip hop artist who are in the streets everyday

Four months ago, Obama had a sit down with a bunch of hip hop artists to discuss criminal justice reform. I must have missed the news about it since I was probably busy helping black inner city high school football players get into college. I certainly didn’t get an invite, which is bullshit.

According to media reports, Obama brought in Nicki Minaj, Chance the Rapper, Ludacris, J. Cole, and Common. Oh, and Miami resident DJ Khaled, a guy whose career I got off the ground. A White House official told TIME that the president selected these artists ecause of the work they have done with communities to represent the issues of young people; especially those of color. They supposedly discussed criminal justice reforms and Obama’s My Brother’s Keeper initiative designed to help inner city youth. You know, something I’ve only been involved in for more than a quarter century.

Seriously, how dare Obama not include me. Whatever the highest degree of being pissed of is, that is where I am at. I know the feds have my phones tapped for being so outspoken about black issues. Obama and his staff should know how much work I have put into helping my community deal with gun violence, teen pregnancy, kids dropping out of high school and lack of jobs.

No disrespect to the artists Obama invited, but I don’t believe any of them have put in 26 years running an optimist club that has saved countless of lives from the streets. Or that they have forfeited making hundreds of thousands of dollars entertaining people to work as a volunteer high school coach helping young men get into college. I work with people who have put in unlimited hours in underfunded youth program in one of the worst neighborhoods in Miami.

This proves Obama is out of touch with the people on the ground floor who stand shoulder to shoulder with the mothers and fathers of murdered children. This shows why he hasn’t solved the gun violence in black communities during his eight years in office.

My guess, this was all done for a photo op and politically correct purposes. Everyone knows Uncle Luke keeps it real. When Obama leaves office, he needs to the back in the streets.