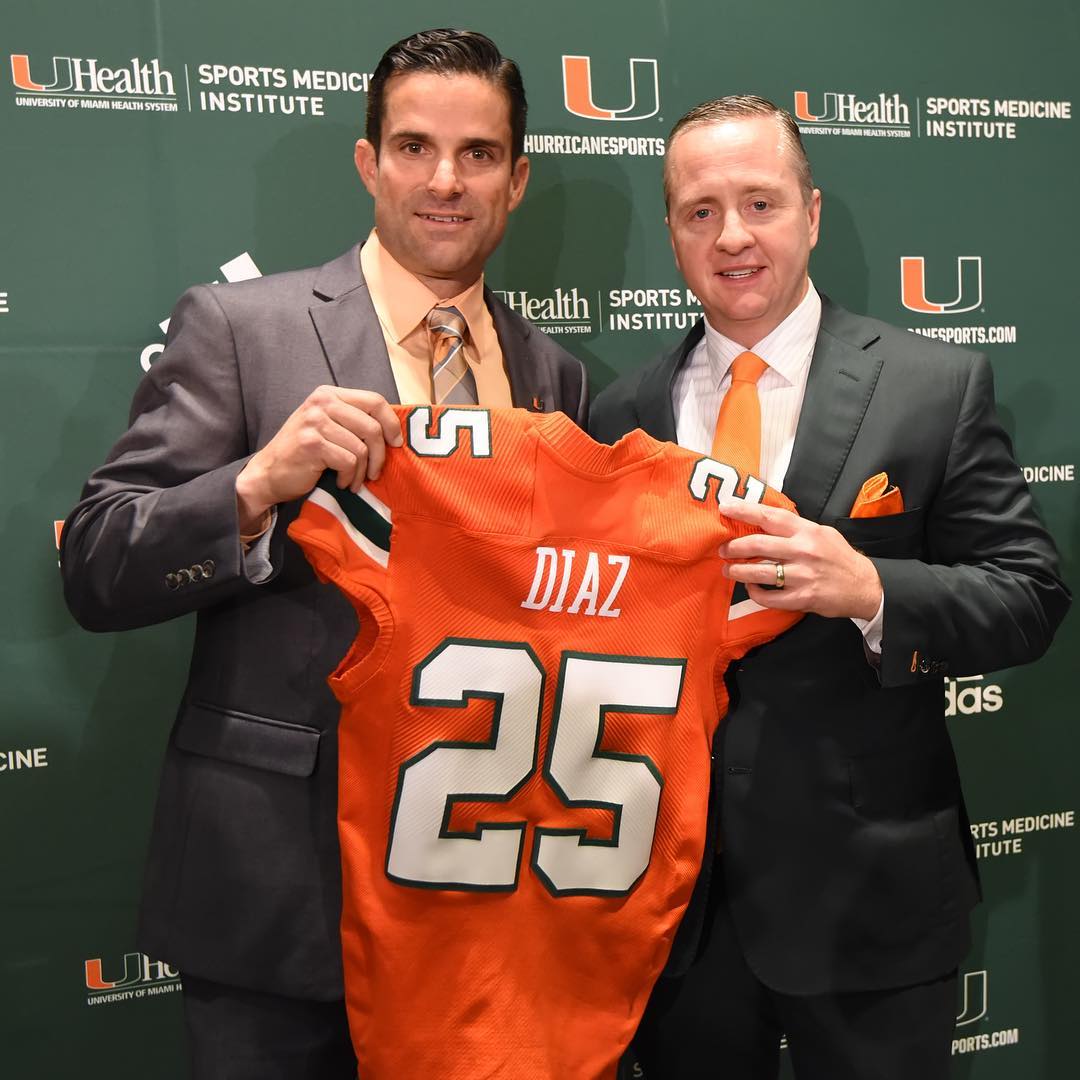 Just when you thought the Miami Hurricanes season was over, a category five upheaval rocked the storied program following the embarrassing 35-3 loss to the Wisconsin Badgers in the Pinstripe Bowl. Over the last week, Mark Richt abruptly retired, opening the door for Manny Diaz to tear up his deal to become the Temple Owls head coach and take over the U.On Jan. 2, Miami Hurricanes athletic director Blake James formally introduced Diaz as the U’s new head coach, who promised to turn around a team that had the nation’s worst scoring offense against Power 5 schools. “[UM] cannot rank second to last in anything,’’ Diaz told reporters at his introductory press conference. Many pundits are praising James for moving quickly to stop the program from losing more recruits by hiring Diaz, a lifelong Canes fan who’s become one of the top defensive college football gurus in the country. But James rushed his decision without taking a good hard look at other candidates who are proven winners at the national championship level. In the local football grapevine, many current and former players, as well as some prominent boosters, wanted James to make a run for Mario Cristobal, the Oregon Ducks’ head coach and former Cane, Butch Davis, the former Canes head coach now leading the Florida International University Panthers, and Lane Kiffen, the Florida Atlantic University Owls head coach who won national championships as an offensive coordinator for the University of Southern California and the University of Alabama. Inside sources told me Blake didn’t want to pursue Kiffen or Davis because he cannot exert control over them. Since Diaz has no prior head coaching experience, he won’t have final decision-making power. I also wouldn’t be surprised if University of Miami president Julio Frenk got a phone call from Diaz’s dad, former Miami Mayor Manny Diaz, to lobby on his son’s behalf. Blake gave Diaz the job so fast that he didn’t give anyone time to provide some input on who would be the best person to take over Canes football. Now the new head coach has his work cut out for him. Diaz definitely produced the second ranked defense in the country, but he mostly won with players recruited by Al Golden, the head coach before Richt. Diaz and Richt are responsible for the worst recruiting class in the school’s history, ranked 33rd in the country following this disappointing season – two factors that would have gotten the entire coaching staff fired at any other top college program. The Canes new leader seems committed to change. In his first official act, Diaz fired the entire offensive staff – a great move. Press reports speculate he is looking to hire former North Carolina Tarheels head coach Larry Fedora or recently fired University of Houston head coach Major Applewhite. If he does, Diaz would be following Richt’s lead of not listening to the local football community.They want Tee Martin, who was recently fired as the offensive coordinator for the University of Southern California. Accoding to my pal and local sports reporter Andy Slater, Martin wants to land in Miami. While he was at USC, Martin helped the Torjans win two PAC-12 championships and coached Sam Darnold, the New York Jets’ first round pick who is a franchise quarterback. Martin is also one of college football recruiters. He even came into our backyard and stole two of the top players in Florida right out of Miami. Martin would practically work for peanuts because he is going to receive $2 million the next two years from USC. In his second big decision, Diaz hired Blake Baker as the Canes defensive coordinator, which raises questions. As defensive coordinator for Louisana Tech University, Baker’s defense gave up 48 points to Florida Atlantic University.

However, history shows that Miami does not do anything the South Florida coaching community wants them to do. Now everyone is waiting for the moment when this experiment doesn’t work, who will take the blame?

The whole thing smells like a set up between James and Paul DiMare, an influential University of Miami booster whose son Gino DiMare got the Canes baseball coaching job without a national search. This is how the U runs things.

In the end, it falls on James because he and Richt were getting murdered on social media. Blake thinks hiring Diaz is a safe bet because Miami’s Cuban community loves it. But the right Cuban for the job is Cristobal, who has proven he can coach a top 5 program and who is loved by the football community.So if Diaz fails, Canes nation is going to run James out of town. But if they hire the right offensive coordinator and some local high school football coaches, Diaz and James have a chance to make the U great again