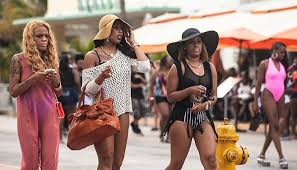 For next year’s Memorial Day Weekend, Miami Beach is taking it back to the old days of segregation when black people weren’t allowed to stay in the city’s hotels and had to leave by sundown. Negroes have been officially banned from the city during the popular holiday weekend that draws an estimated 200,000 visitors.

Of course, Miami Beach elected officials who came up with the plan to put on an air and sea show honoring military servicemen insist they are not looking to stop people of color from vacationing in the city. Commissioner Richard Grieco recently told a local television station that race played no role in masterminding the show idea.

“That’s kind of baiting people into an argument that doesn’t exist,” he said. “I didn’t realize that watching planes and looking at military ships was some sort of race specific thing.”

He also claimed the city is going to reach out to the Tuskegee Airmen, the black fighter pilots who fought in World War II, to come down.

Grieco is taking a page out of the Donald Trump playbook by disguising his racism with patriotism. After all, it’s hard to argue against celebrating America and the servicemen who have given their lives protecting our freedom. But this is really a calculated move to drive black tourists out of Miami Beach because of the bad publicity the city receives for turning into a police state during Memorial Day Weekend.

For years, Miami Beach never spent a dime to develop programming and events that welcomes the throngs of young black adults from across the country flocking to the city’s Art Deco hotels and sandy shores. Now, the city has money to put on an air show. Give me a break.

The air show also guarantees that the city will be able to block off hotel rooms for air show attendees and participants, making it harder for anyone else to find accomodations during Memorial Day Weekend. And I’m pretty sure black people represent a small fraction of air show demographics.

I’m really surprised Mayor Philip Levine is going along with this garbage. Considering he has aspirations of running for governor or U.S. senator, Levine risks alienating African American voters in Florida. He’ll be known as the mayor who got rid of Urban Beach Week and told black people to stay home