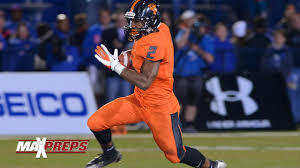 Miami Police railroaded local football star Mark Walton. This past April 23, the 19-year-old University of Miami running back was arrested for drunk driving after he failed road sobriety and breathalyzer tests.

WPLG 10 reported that the police may have been targeting Walton, who is suspended indefinitely from playing for the Hurricanes. A woman claimed a man matching Walton’s description pretended to be a police officer and pulled her over on April 21. She alleges the man rubbed his genitals on her back and promised not to give her a ticket if she would call him. She provided them with a phone number that matches Walton’s.

However, Walton may have been set-up, according to a recent report by 940 AM sports talk radio host Andy Slater. He raises some very interesting questions: Why would the alleged victim keep the phone number of a man who groped her? Why did she wait 33 hours to report the crime? Why were the cops directly outside her house when they stopped Walton’s car? And why would he be there at four o’clock in the morning is she hadn’t called him to come over her place?

The police version just doesn’t add up. I’m sure Walton’s phone records will show that she called him shortly before he got busted. Here is what I think happened: She has a boyfriend who found out she was talking to Walton. Then, investigators helped her entrap Walton because they knew arresting a Hurricanes player would generate headlines.

In fact, someone in the department immediately tweeted his arrest. Now this poor kid has been walking around campus with people looking at him like a sexual predator for the past month-and-a-half. according to Slater.

Miami Police helped destroy the reputation of a young man who made it out of Overtown, one of the city’s most violent neighborhood. It’s appalling and disgusting because they know what happens to inner city children who go the wrong way. They die in the streets. But Walton earned his way to the safe confines of a prestigious university.

The mayor, city commission and the city manager need to fire every cop who was involved in smearing Walton, including the mother fucker who tweeted his arrest. He’s a good kid who didn’t deserve this