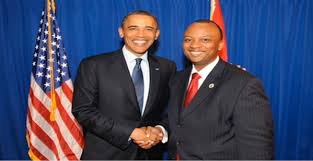 The all-important Black Elections in Miami that the White Media has Forgotten about. Here’s my checklist

With the August 30 primary around the corner, all the local media attention is focused on the race for Miami-Dade County mayor between incumbent Carlos Gimenez and School Board member Raquel Regalado. However, there are other local races that are significantly important for the African-American community.

In Miami Gardens, Mayor Oliver Gilbert is in a heated race against former city Councilman Ulysses Howard and ex-Opa-Locka Police Chief James Wright. Howard, who was appointed to the council in 2005, subsequently ran in three elections and lost, most recently in 2012. Howard is a free lunch candidate. Wright, who was fired from Opa-Locka in 2008 amid allegations he sexually harassed subordinates, is trying to get back in the race after being disqualified by a judge. For obvious reasons, Miami Gardens residents should re-elect Gilbert.

Miami-Dade School Board member Wilbert “Tee” Holloway, whose district includes Miami Gardens and Opa-Locka, is also seeking re-election. I remember when I was having trouble getting my coaching certification approved by the Florida Department of Education, I called Holloway several times for his support. He never picked up the phone I’m pretty sure there’s a lot of people he didn’t pick up for like me. So it’s time for new blood someone who has their ears to the streets and will pick up the phone. Voters should cast their ballots for Steven Gallon III, a former Miami Dade Public Schools adminsitrator who served as public schools superintendent in Plainfield, New Jersey.

In the crowded field to replace retiring state Sen. Gwen Margolis — forced out after making dumb comments about Haitians coming after her seat — the most recognizable names are state Rep. Daphne Campbell and former Miami Beach commissioner Michael Gongora. Ive seen signs for Campbell all over northeast Miami-Dade County, but I never heard of her until a quick Google search revealed a trail of news stories documenting fraudulent schemes she and her family members have been involved in since she got into office. So I’m going with Gongora, who hasn’t been rocked by scandal and who has been reaching out to black voters.

Finally, we have Randall Hill, a Homeland Security agent who played football for the Miami Hurricanes and the Miami Dolphins, challenging Congresswoman Fredrica Wilson. I loved Hill when he was a Cane and enjoyed his breakout performance in The U documentary. But he has not put in the community hours in Overtown, Liberty City, Opa-Locka and Miami Gardens.

Besides, the next time the Hat Lady is up for re-election, I may run against her.

Next week, I’m doing a full column on the white people running.