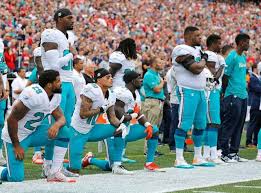 Last week, the four Miami Dolphins players who joined Colin Kaepernick’s protest of the national anthem held a town hall meeting with community activists and top police officials to discuss ways to prevent cops from recklessly killing unarmed black people. It was a good start to addressing the biggest issue for African Americans.

“We had a some really healthy conversation, some healthy dialogue,” said linbacker Jelani Jenkins. “We could just tell there were a lot of people in there who really cared about the community.”

Jenkins and three of his teammates, as well as other players around the league, are raising awareness to a problem that we’ve been fighting since the Civil Rights era. I was one of the people at the meeting who was here for McDuffie riots in the 1980s. Decades later, similar scenes continue to play out across America. In Charlotte, violent protests have erupted over the killing of Keith Scott, a black man shot by an officer the same day the Dolphins held their meeting.

For community activists like me, the meeting was an opportunity to school Jenkins and his teammates about the struggle young black men face in Miami. Booker T. Washington High football coach Tim “Ice” Harris told them about how his players are often stopped and forced to lay down  on the ground when they are going home from practice by cops who mistake them for criminals.

It was also a chance us a chance to challenge assertions made by police officials. Miami-Dade Publics Schools Police Chief Ian Moffit, who is African American and a friend whom I respect, tried to claim that the law applies to cops the same way it applied to civilians. I interjected and said he was wrong, noting that Florida is among several states with laws that make virtually impossible to convict a cop for killing an unarmed person who posed no threat. And let’s not forget, the Miami-Dade State Attorney’s Office has not indicted a cop since the 1980s.

More importantly, I urged the Dolphins players to do more than kneel before the anthem to help South Florida’s African American community. It’s not enough to participate in protests and give away bookbags at the start of the school year. As homeowners, they pay taxes and have the right to question local government about where their money is going.

I encouraged Jenkins and the three other players to show up at city commission, county commission, and school board meetings and speak up for organizations and programs in inner city neighborhoods that are often ignored and never recieve funding.
Follow me on Twitter @ UncleLukereal1 and Instagram @ UncleLukeReal1