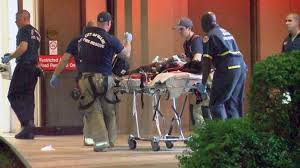 Once again, gun violence and murder intersect at the Liberty Square apartment complex, better known as the Pork n’ Beans. On April 8, two young men were killed and another two injured while they chilled outside a row of apartments at Northwest 63rd Street and 13th Place. According to the Miami Herald, witnesses heard at least 25 shots and claimed the unknown gunman “came through like they thought they were Rambo.”

Three of the victims attended Miami Northwestern Senior High, prompting students to hold a walkout on April 8 to protest gun violence and honor their fallen classmate Kimson Green, a 17-year-old sophmore who was about to be inducted into the National Honor Society. It is a familiar tragedy that will keep repeating because no one outside of Liberty City cares.

Miami-Dade County Commissioner Audrey Edmonson and Miami-Dade Mayor Carlos Gimenez certainly don’t give a fuck. Even though the Pork n Beans is in Miami city limits, Liberty Square is owned by the county. Edmonson and Gimenez have a duty to make sure residents don’t have to live in constant fear of being shot to death on a daily basis.

The apartment complex is not some sprawling city. It runs from 12th Avenue to 15th Avenue and from 62nd street to 67th street. That’s roughly eight blocks, but a county government with a $7.4 billion annual budget can’t provide security measures to protect the residents of Liberty Square.

It’s all by design, county officials don’t want to make Liberty Square safe. They need a reason to justify tearing down the Pork n’ Beans and shipping longtime residents off to Homestead or Miami Gardens. How else can they explain not putting in a security surveillance system on every inch of Liberty Square that would help police gather evidence and identify these killers? If I was mayor, I would have the entire place wired for sound and video. Liberty Square should have street cameras just like downtown Miami and Brickell Avenue. I’d install gunshot detection and location system in every building too.

The only time Edmsonson and Gimenez have shown interest in the Pork n’ Beans is when they hold workshops and community meetings about how they are going to let their developer buddies tear down Liberty Square and build condos. They are helping their friends make money as payback for giving them campaign contributions.

You know who else does not five a fuck? White and Hispanic voters in Miami-Dade. They believe this is a problem for the niggers and they keep voting for these Cuban mayors who don’t give a shit about African Americans. Special interest groups like the Kendall Federation of Homeowner Associations and the Latin Builders Association are good at taking care of their own people, but are missing in action when it comes time to help minority communities.

I don’t see so-called great civic icons like Norman Braman fighting gun violence in Miami’s inner cities. That’s because he gets to live in the affluent Indian Creek neighborhood of Miami Beach, where police have license plate readers so they can track your ass and see if you have a warrant for your arrest. And the only time you see Braman reaching out to black people is when is trying to recall county politicians or pushing a multi-billion dollar bond issue.

And blacks who harbor killers in Liberty City deserve blame too. You have parents who know their sons are thugs because they come home wearing big and chunky gold chains but have no jobs. When that young man comes home with $2,000 in his pocket, momma ain’t saying shit until he is the one who gets shot. Then momma is on television crying about her son.

It’s a sickening, never-ending cycle. But we all have the power to make it stop spinning if we came together as One Miami.